SITTING IN: interview with Ryan Steers

We are excited to have Ryan Steers chat with us on location from ‘Dirty Kanza’. Ryan is an ex Pro MTB cyclist and works with retired Pro Road cyclist Dave Zabriskie organising epic Gravel Camps in Los Angeles. Very cool. We have people on the platform from 87 countries but our biggest user registration base is the US so it’s great to have you guys on here.

UNFOUND: So, Ryan, tell us about you, your background, cycling not cycling, the man behind the profile, who are you?

RYAN: I grew up out east in Virginia and came to Los Angeles in 2003 for college and never left. I spent about a decade trying to leave until I discovered how good the riding is. That’s how I form my basis of opinion about places, how good the riding is. Now I’m a family man; professional dad and bike racer guy. I’ve got a two year old and a four year old and I’m home with them and I ride when I can, I’m really lucky. I raced on the road for a bit and then got into mountain bike racing and worked up to the Pro level and that started to become less fun so I found gravel and am leaning more toward adventures and sharing the fun these days. I currently ride for Giant Bicycles, and Dave’s with 3T on the dirt so that’s how we’ve been able to get some great Explore demos bikes for the camp. 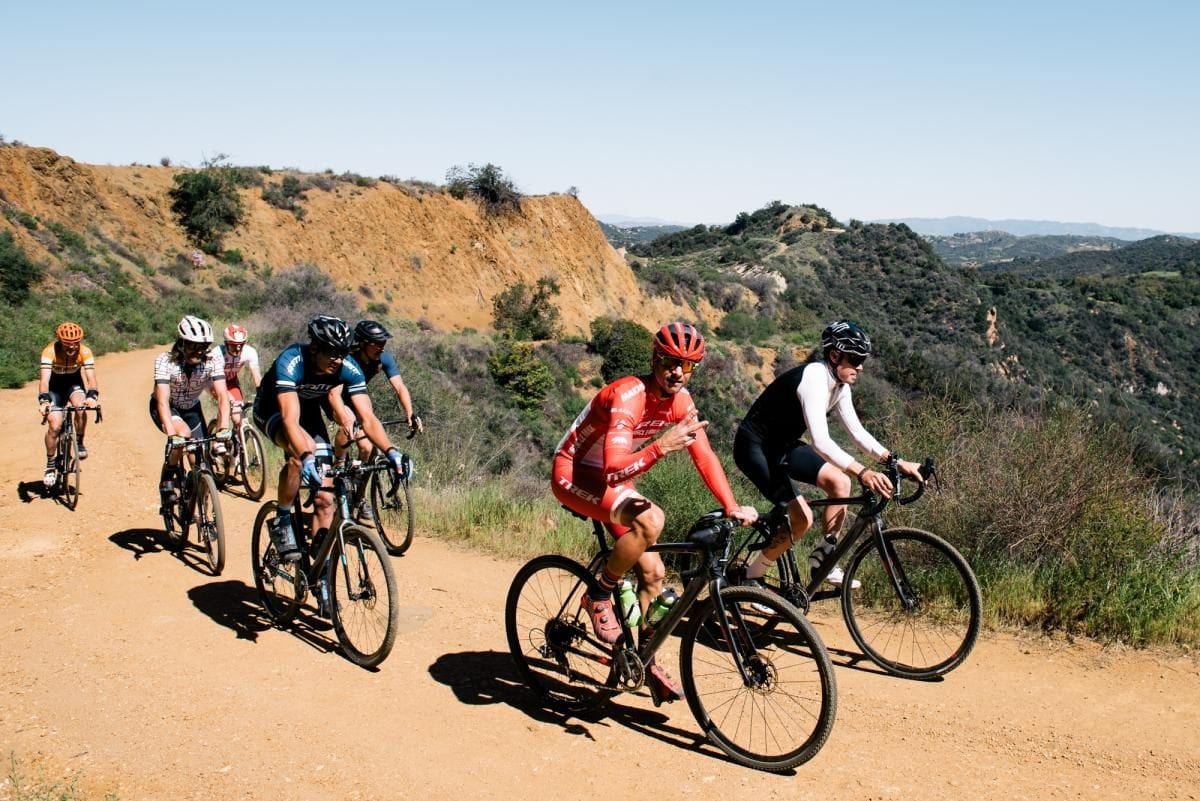 UNFOUND: That’s cool. How did you meet Dave Zabriskie and when and why did you start doing gravel camps?

RYAN: I met Dave though Robbie, the owner of Pedalers Fork, at Pedalers Fork in Calabasas, which is where our camps are based. It’s this amazing bike shop, coffee shop, restaurant and everything you could ever want. It was early 2014 and Dave had gone into retirement mode and was settling down into civilian life so we started doing a lot of mountain bike riding together, then we went out to Leadville with a crew from Pedalers that August and really hit it off. Dave was approached two years ago about doing a road camp on a large scale and asked me to help out, we started to develop this project but realised we really weren’t into the pavement and the road scene. He was over riding in traffic and cars and we spent all our time on the dirt, so why not get more people on it. Everyone knows LA from the famous road climbs and the Tour of California but not many people know the dirt side and that’s what we really want to show people. Dave was hacking together gravel bikes back when he was racing in Europe so he’s been on the scene for a while. 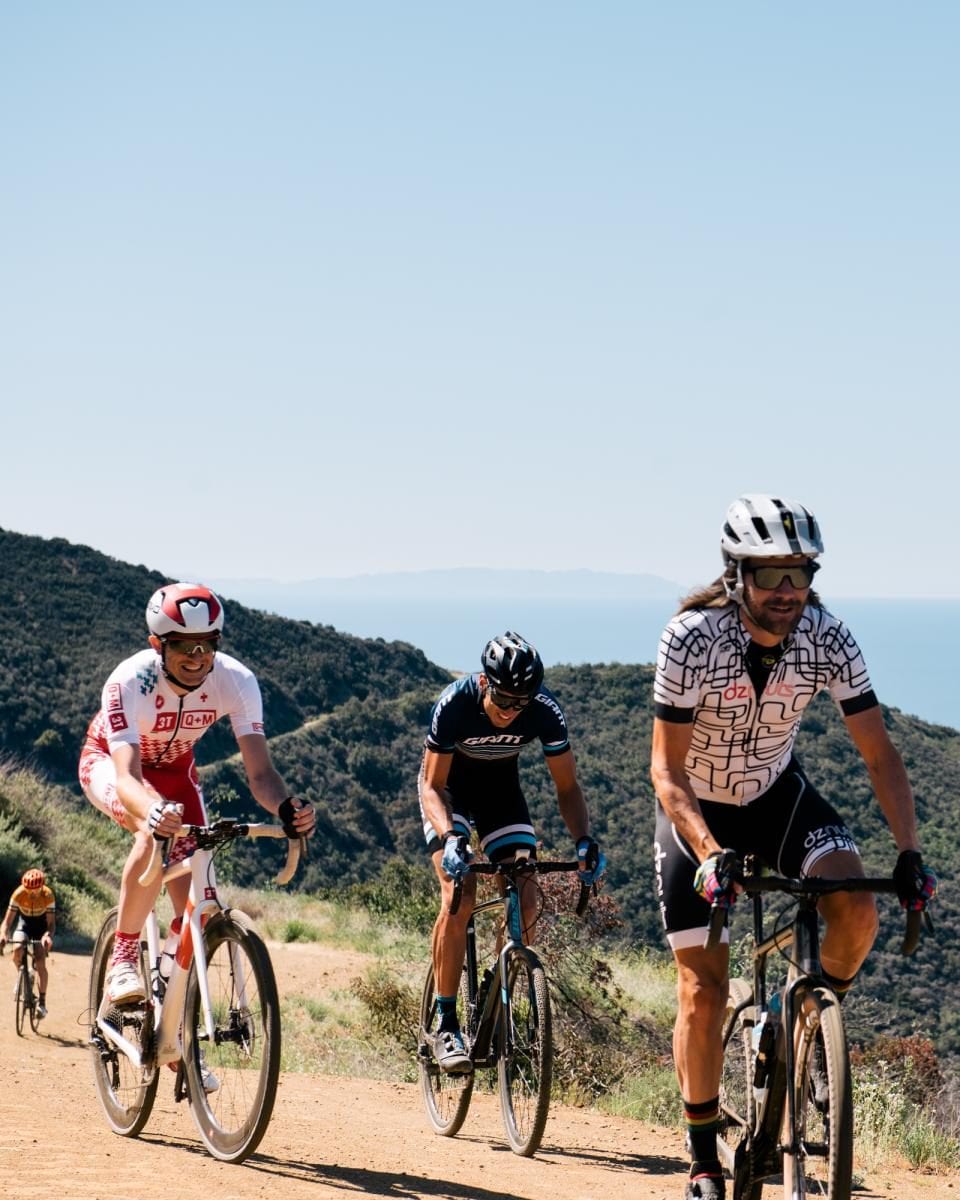 UNFOUND: Having a read through your website, it’s clear you really love this; the passion is evident – plotting new routes, exploring new places, and we love that too. How tough is the riding and can that be tailored depending on the group?

RYAN: Yeah, it’s a passion project for sure. Our goal is to share what we do on a weekly basis with people from out of town. It’s like a ‘birthday ride’ every day for four days – you eat, you drink, you ride with friends and we take care of you. The terrain is pretty hilly and there’s one big ride day, however, the difficulty depends on the group. We try to do a little interview and intake questionnaire so we get a feel for where people are at. We want everyone to have an awesome time and that means if there’s eight people who want to sign up for a hardcore hammerfest and two people who have never ridden off road and want an easy tour we’ll try to find alternate dates so we can structure weeks for different ability levels. It all kind of evens out naturally. We also offer private camps, which seems like where things are headed. People grab a few friends and sign up as a group and we’ll bounce some dates around and make it work with some custom options. 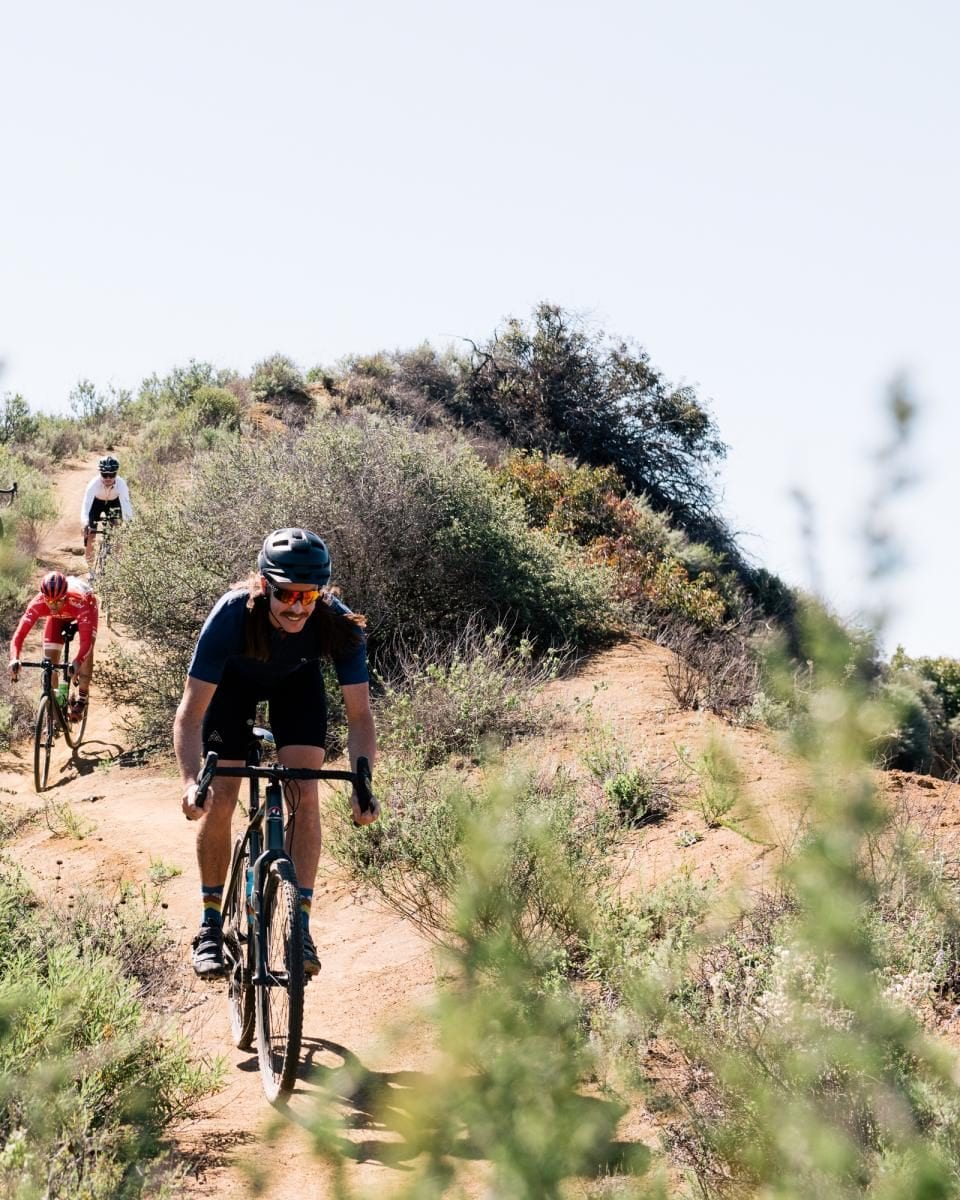 UNFOUND: Tell us about your favourite route, climb, day and what makes it so awesome.

RYAN: That’s a hard one. My favourite climb is Bulldog because it’s so terrible. It’s one of the hottest spots in the Santa Monica Mountains, it’s really steep and loose but the view at the top is amazing and it takes you to the best spot in the Backbone Trail so there’s an amazing reward and the best single track around once you hit the top. My other favourite climb is semi-gated/secret/steep and crazy but you’ll have to come to camp to find that one. I love to go for a 5-6 hour exploration ride and being able to tie a bunch of areas together from Malibu to Topanga, but lately I’ve been having fun towing the kids in Chesebro, which is part of the Santa Monica Mountain National Recreation Area and right next to my house. We’ve had some really fun family bike and picnic rides that the kids have gotten excited about. 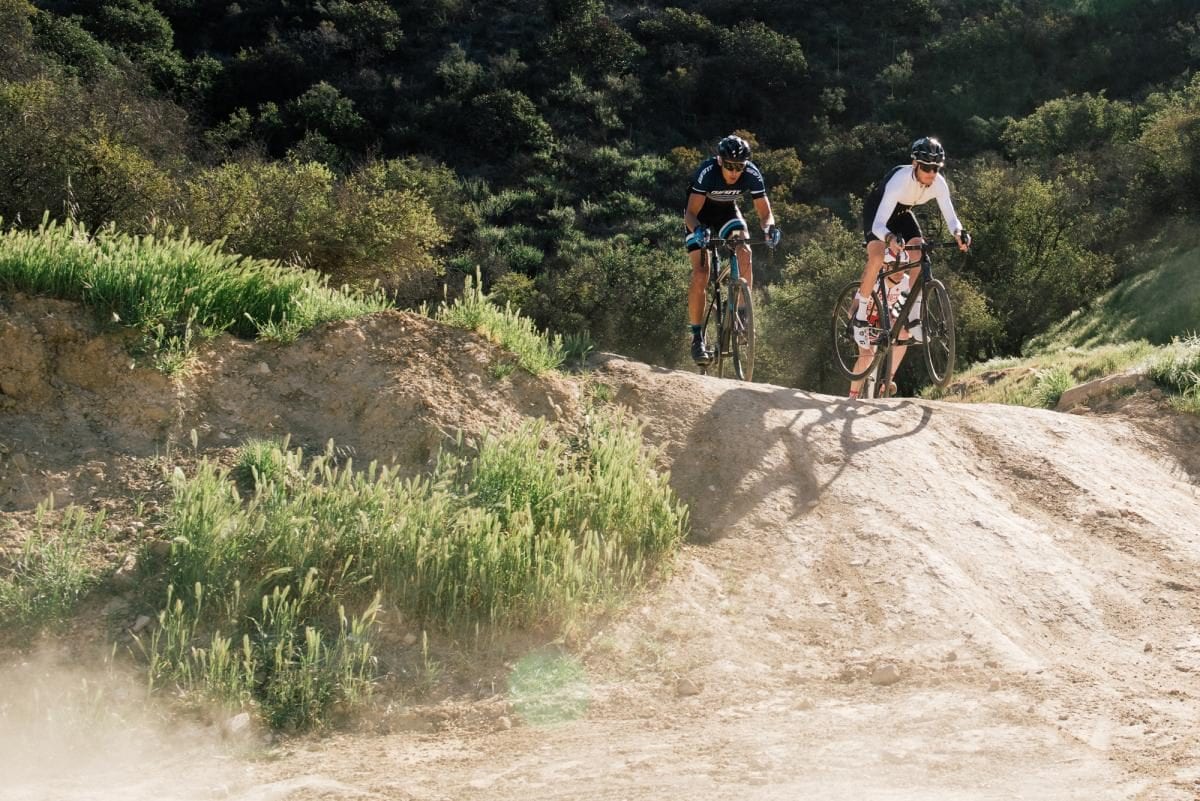 UNFOUND: Your trips are four days and three nights, talk us through a typical week and some of the things people should prepare or be aware of.

RYAN: Sure thing, you arrive Monday night and get settled in. We have a few 3T Explore demos that are included with the camp so we’ll fit you on those. We then do a fun little optional evening spin before dinner. Get cleaned up, have an amazing meal at Pedalers Fork, we’ll do a little intro party and we’ve tried to line some fun guests up as well for each session. There’s also a little short cycling rockumentary movie we’re fond of so we’ll probably screen that the first night. On Tuesday we’ll have breakfast at Pedalers Fork and then head out to Topanga for a great fireroad spin with some ocean and city views. We’ll have a nice lunch back at Pedalers Fork and then regroup for an optional short evening spin. We’ve got a few local masseuses so we’d like to offer that service as well. We have dinner back at Pedalers Fork and then, maybe, a Big Lebowski night; or we’ll go bowling. Wednesday is our Queen Stage with an epic day in Malibu on pavement, fire roads and singletrack. We’ve got lunch lined up at this magical little outdoor cafe in Malibu and we’ll spin back to Pedalers for a post ride dinner. Thursday morning is a fun local ride right out the door after breakfast and then lunch at Pedalers Fork before people depart for the airport. We’re trying to create an environment for great fun and riding without bogging people down with too much planned activity. We want the experience to be about the food and riding. 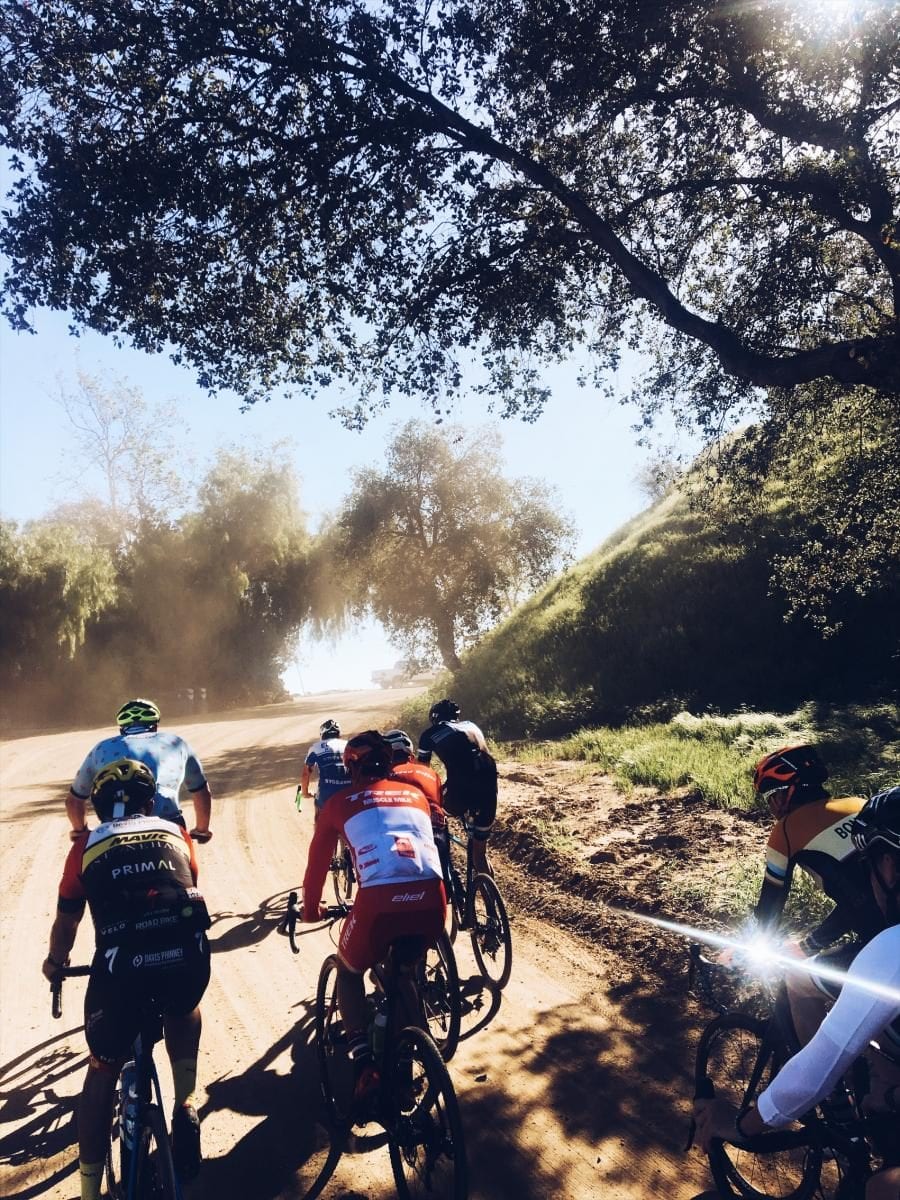 UNFOUND: Do you stop for food or eat on the go? If you stop, what’s your favorite place to stop for lunch and what would you order?

RYAN: It depends on the day. We’ll stop for food during the ride to refuel. We’ve partnered with Bonk Breaker for ride snacks and we’ve got support vehicles with food and water and anything else riders might need. We’ve also got an incredible fresh banana bread stop at one of our favorite spots Topanga Creek Outpost for the first full day. The meals will all be at Pedalers except for one day in Malibu. The brisket sandwich at Pedalers is out of this world. They also have amazing jackfruit tacos and quinoa burgers if you’re going veg. I usually order one of those items. And for those who imbibe the on-tap beer selection is incredible. 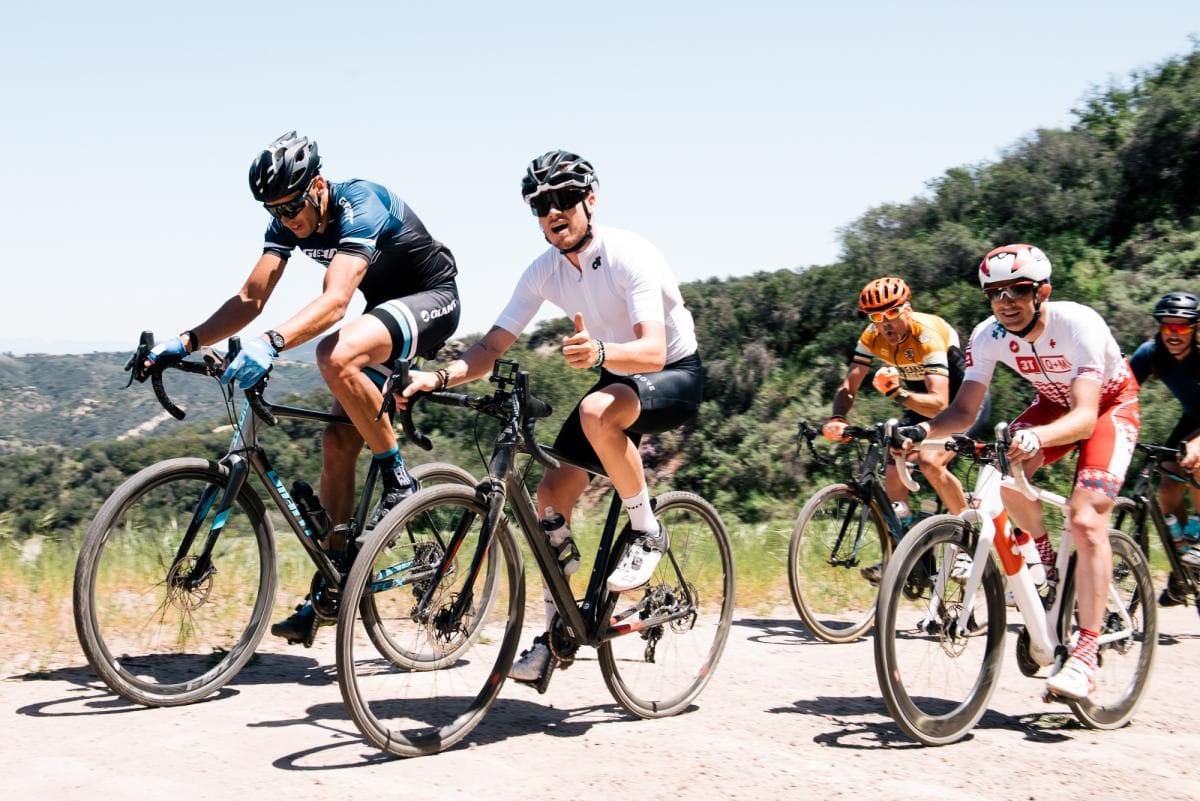 UNFOUND: So, if someone has read this, seen the photos and is super pumped. Do you have any availability this summer and the rest of the year?

RYAN: We try to keep a few openings available, we’ve had a great response and we’ve got a few spots left for our 24th June camp and then we’ll take a little break until things cool off. The weather right now is perfect but August and September can get pretty warm. Things are filling up for the winter months so plan ahead, January through March is an amazing time out here in the Santa Monica Mountains. 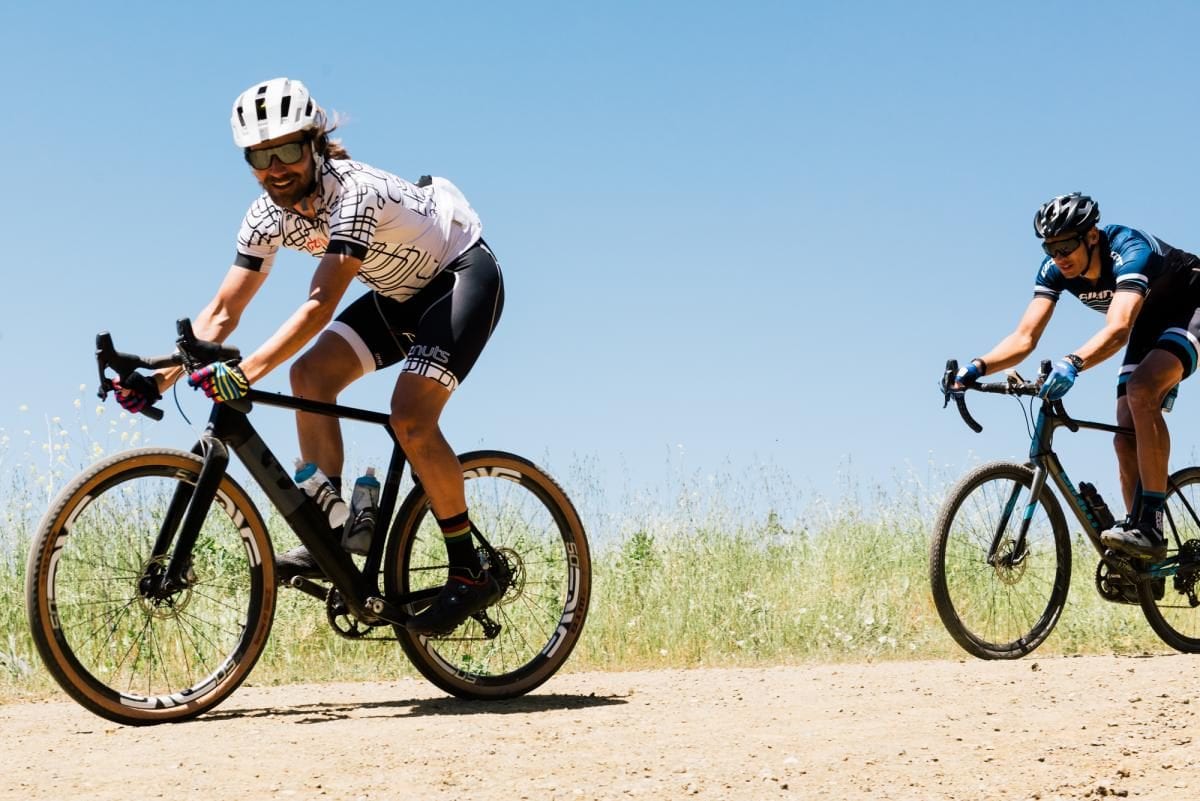 UNFOUND: We’ve got to ask, Dave Zabriskie – what’s he like, still strong on the bike? Sum him up for the readers.

RYAN: Hmmmm…one of a kind. I’ll use Jack Nicholson films as a reference – let’s just say he’s Jack Torrance, McMurphy, and The Joker rolled into one. And yes, he’s still strong…when he wants to be. 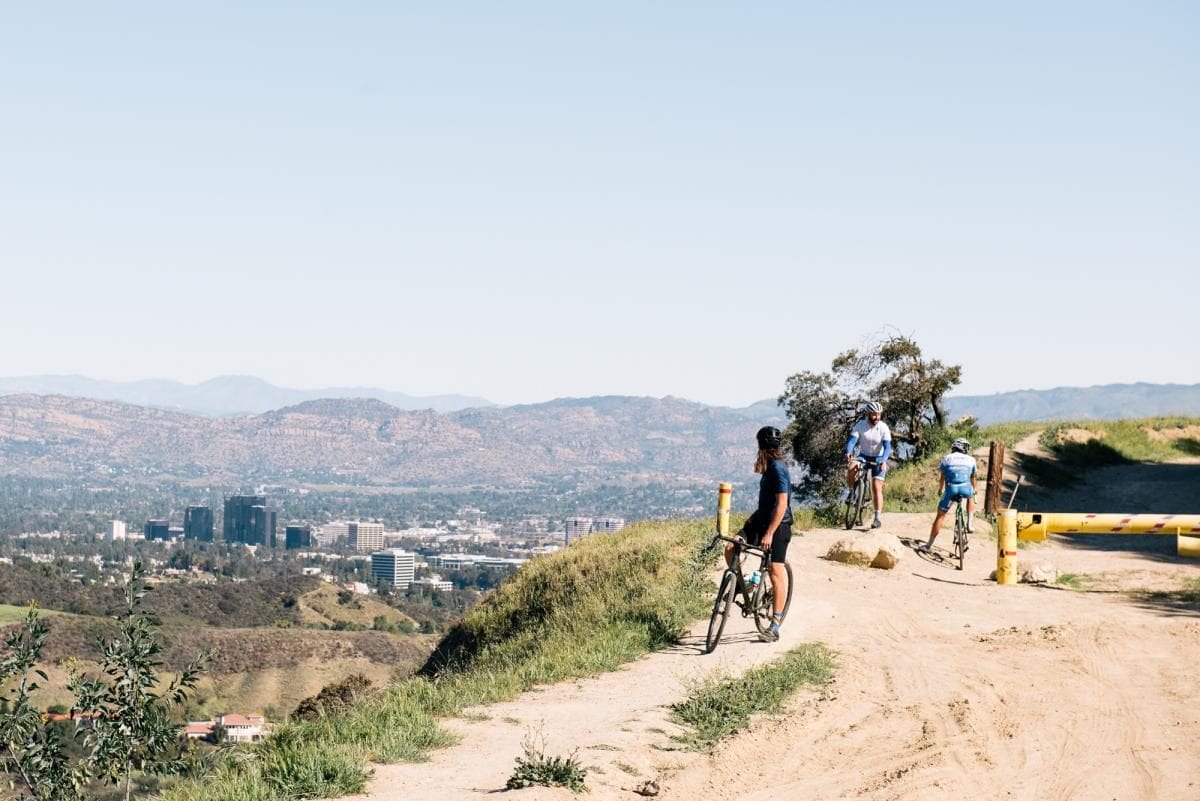 UNFOUND: And finally, what is the funniest thing you have seen or experienced on the bike?

RYAN: So Robbie, the owner of Pedalers Fork, is really into his bike gadgets and he had the mechanic, Derek, set up a wireless dropper post on the mountain bike. Robbie didn’t know, but Derek had programmed two remotes and gave one to Robbie and hid one in his pocket. During our mountain bike ride Derek would pull out the remote and randomly raise and lower Robbie’s post so he’d just keep dropping and popping back up and the seat kept hitting him in the junk. He got so furious. He had no idea what was going and thought the dropper was going haywire. To this day I’m not sure he ever knows that Derek was behind it. 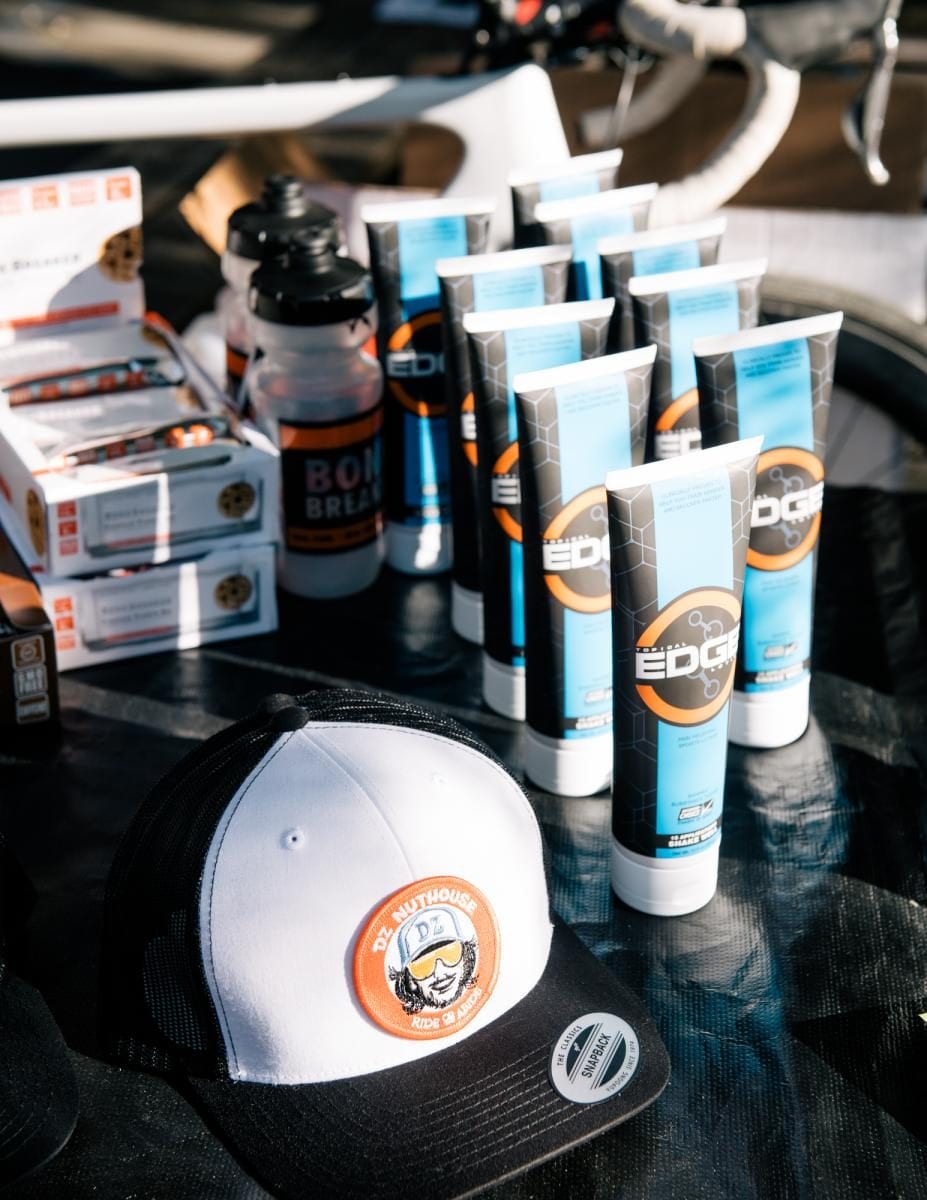 UNFOUND: Ryan, thanks so much for joining us, great to have you on the hub and awesome to hear about your epic LA adventures.

To find out more join the DZ Nuthouse group page on the hub to see rides, photos and news from the guys – you can also contact them on there to get yourself booked up on one of their trips.

Visit DZ Nuthouse on the hub

SITTING IN: interview with Kirsten Scully