When you’re a cyclist, especially one in a city like Hong Kong, you always have friends linking you up with ‘out of towners’ who are looking for a local ride. However, it isn’t often that the ‘out of towner’ turns out to be an ultra-distance cyclist who is taking on the Trans Am Bike Race in early June.

Like all great cycling meet-ups, I received a message from a cycling friend, who had just moved to Australia. He asked if I could help a ‘friend of a friend’ who was going to be in Hong Kong for the weekend and wanted some ideas of where to ride. I suggested that he join us on our Saturday club ride. With a lot of people away for the holidays not much was planned but logistics were exchanged and we had a time and place to meet.

Relieved he’d made it to the rendezvous point, I met Abdullah Zeinab by the bus stop. He came over and introduced himself, relaxed, down to earth and with a broad smile. We soon rolled out to meet the others. Abdullah was on a Specialized Tarmac disc, with a frame and top tube bag and fitted tri bars. I could see these had been properly fitted for him and when he dropped into them, he had a powerful and efficient position on the bike. However, he didn’t necessarily look like a cyclist and seemed more laid back then most ‘out of towners’ who have joined for group rides. From a roadies perspective, he seemed full of contrasts. He was big, athletic and powerfully built. His top was not fitted, his legs were not shaved, he wore ankle socks and even asked, “what is it with cyclists and the long socks?”. But then he was powerful, really really powerful on the bike. It was blowing my brain. We rode socially for about 40 km before riding up Route Twisk, the first half of the stunning Tai Mo Shan climb here in Hong Kong. Sadly the rumble of thunder and rain meant we decided just to ride Route Twisk, which is still a 5 km climb, 20 mins, okay; 23 mins. We didn’t race up but it was a solid effort and Abdullah rode the vast majority of it out of the saddle, pushing a big gear and happy to chat while I dug deep at threshold. “This guy is a machine” I thought to myself. We descended the way we had just come up and with persistent rain, we rode the 10 km to stop for coffee.

His top was not fitted, his legs were not shaved, he wore ankle socks and even asked, “what is it with cyclists and the long socks?”.

Unbeknown to me, it was one of the most fascinating coffee stops I’ve ever enjoyed. Abdullah is so down to earth and unassuming but when we got him talking about his ultra-distance cycling he had the most amazing mental fortitude, focus and clarity. The way he articulated his adventures was enthralling and inspiring. 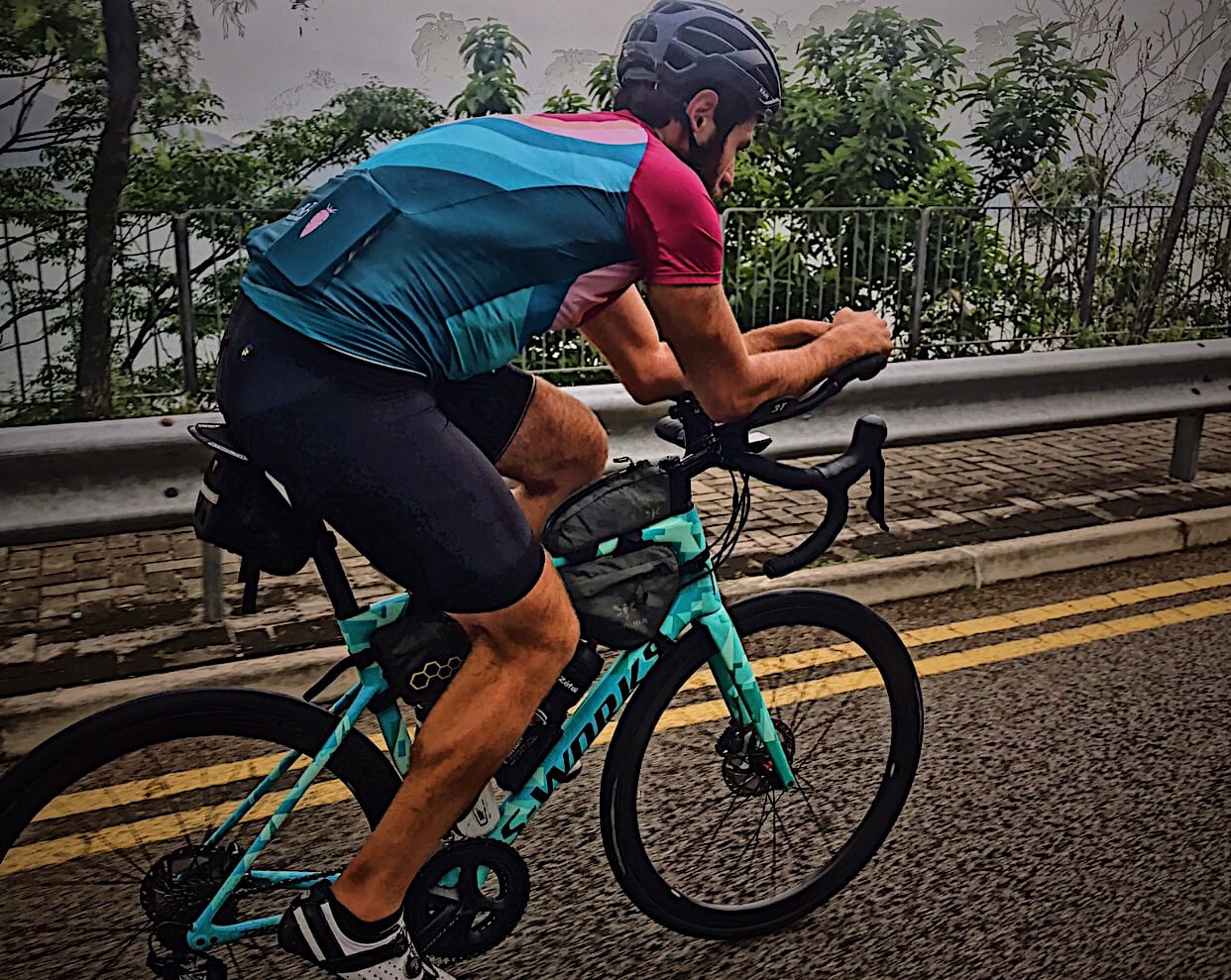 We had learned that Abdullah had done the ‘official unofficial’ Indian Pacific Wheel Race – a ride across Australia – last year. Abdullah was inspired to do the race as in 2017 he had made a documentary of the race with his girlfriend, Jyss. I’ve watched it, it’s an absolutley a stunning film, a superb insight into ultra-cycling and well worth a watch – check it out below.

2018’s race was only ‘unofficial’ after more information had come to light in the inquest into the tragic death of Mike Hall the previous year. However, 53 riders set out as planned to ride in memory of Mike. Unsupported and also now unofficial, they rode from Perth to the Sydney Opera House. A sensational achievement; which also helped us understand why he had been so strong that morning!

However, the Indian Pacific Wheel Race was just the start. He went on to discuss his forthcoming race, Trans Am this June. 6,760 km across ten states of the U.S. Truly epic. Abdullah was telling us that the crowds for the leading few riders are superb. That’s when I asked the question:

“Are you hoping to be up there? How did you get on in the Australia race?”
“I won it”, he responded, as a statement of fact rather than a boastful expression of achievement.
“Was it close?” I asked.
“Na, not really, I won by two days”

5,500 km averaging a staggering 450 km a day. From that point, you can imagine the questions we had for him and he happily answered every one, continuing into our second ascent of Route Twisk after coffee.

You meet some people who leave an impact on you. Abdullah was one of those people. His outlook and approach to life is a little bit different. No-nonsense, no excuses. It’s refreshing.

So with just a few days to go to Trans Am – it starts on the 2nd June – please join us in supporting Abdullah in his quest. An amazing athlete and super guy, we will be having a chat with him after his adventure to get a full debrief, so let us know if you have any questions you want us to ask him.

The team at Unfound look forward to seeing how he gets on.

Wildman in the Woods