Riding the Niseko Classic in Japan

Regardless of when you got into cycling, the thrill and excitement of the first races and events you do can rarely be recaptured. Let hub member and Hong Kong resident Ric Shadforth take you on a personal journey to Japan where he took part in the Niseko Classic Gran Fondo. Relive his joy and excitement in a spectacular part of the world to cycle.

I couldn’t believe I’d screwed this up. Five months of training was about to be wasted and I’d be eliminated at the first check point. I’d been pacing myself until now but with three kilometers to go I had to put the hammer down. But I was two hours into the ride and had already put out my lifetime best 90min peak power performance. I didn’t have too much left. The wind was so strong it was like riding through treacle. I tucked behind Kris and pumped as hard as I could…two minutes left…one minute left…

This journey began in late January 2019, over dinner with two buddies in Hong Kong. I’d been riding for about three years but had hit the inevitable plateau. My first year saw stratospheric gains but by the third year I was going backwards. Something needed to change else I’d revert to my former, fatter self. That evening I was introduced to the concepts of periodization training and the writings of Joe Friel. I was also talked into a subscription to TrainingPeaks. But I still needed a target if I was going to make progress.

It was just a couple of weeks later that another friend suggested I join him in Japan at the Niseko Classic, part of the UCI Gran Fondo World Series. I’d seen this race advertised while skiing earlier in the year, but had discounted it as being too hard. However my wife talked me into it, knowing I work best when I have a stretch-goal. Over the following months I ramped up my riding from five hours a week to 12 and saw new PRs appearing on Strava as my power went one way and my weight went the other. 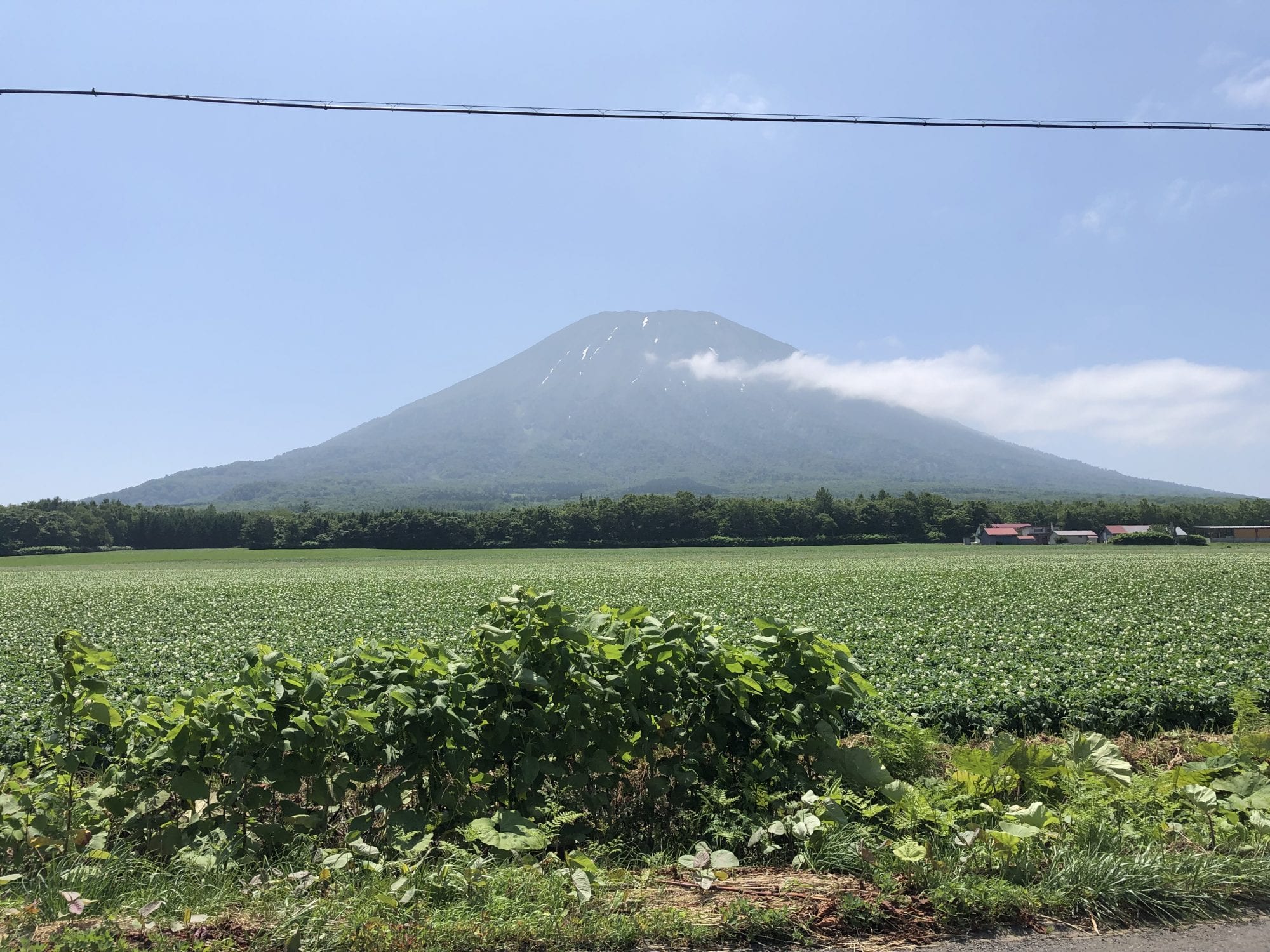 Finally 7 July rolled around and my first ever race day was here. I was a bundle of nerves, anticipation and excitement. We rolled off the start in waves – me in the 40-44 age group – and into the 6 km neutral zone. It was an unnerving experience with riders pushing past me through the smallest of gaps. Finally the race was off as we punched up a first short climb and I tried to keep with the group ahead. The climb slackened and I hit a hard but steady pace over the rolling hills of the first section.

Suddenly out of the crowd I saw a fellow rider, Kris, from Hong Kong. I knew there was a problem for him to be back here with me. He is an exceptional rider who would have won this year’s Tour de Bintan stage race but for a mechanical in the final 15 km. And he’d come second overall in the Niseko ITT the day before. Sure enough he appeared at my side a moment later, explaining his front derailleur was misaligned and his chain kept dropping. His race was over before it had begun and he had decided to drop back to help me out.

The hardest thing about the Niseko Classic is not the 140 km distance nor the 2,400 m of ascent. I’d done a Grand Fondo before with similar stats. It’s the time cuts. Niseko has checkpoints with very tight cut-offs and if you miss one you are pulled out of the race. The whole ride had to be completed by midday and there were four checkpoints along the way. The first was 47 km in at the top of the famed Panorama Line climb and I had two hours to get there. 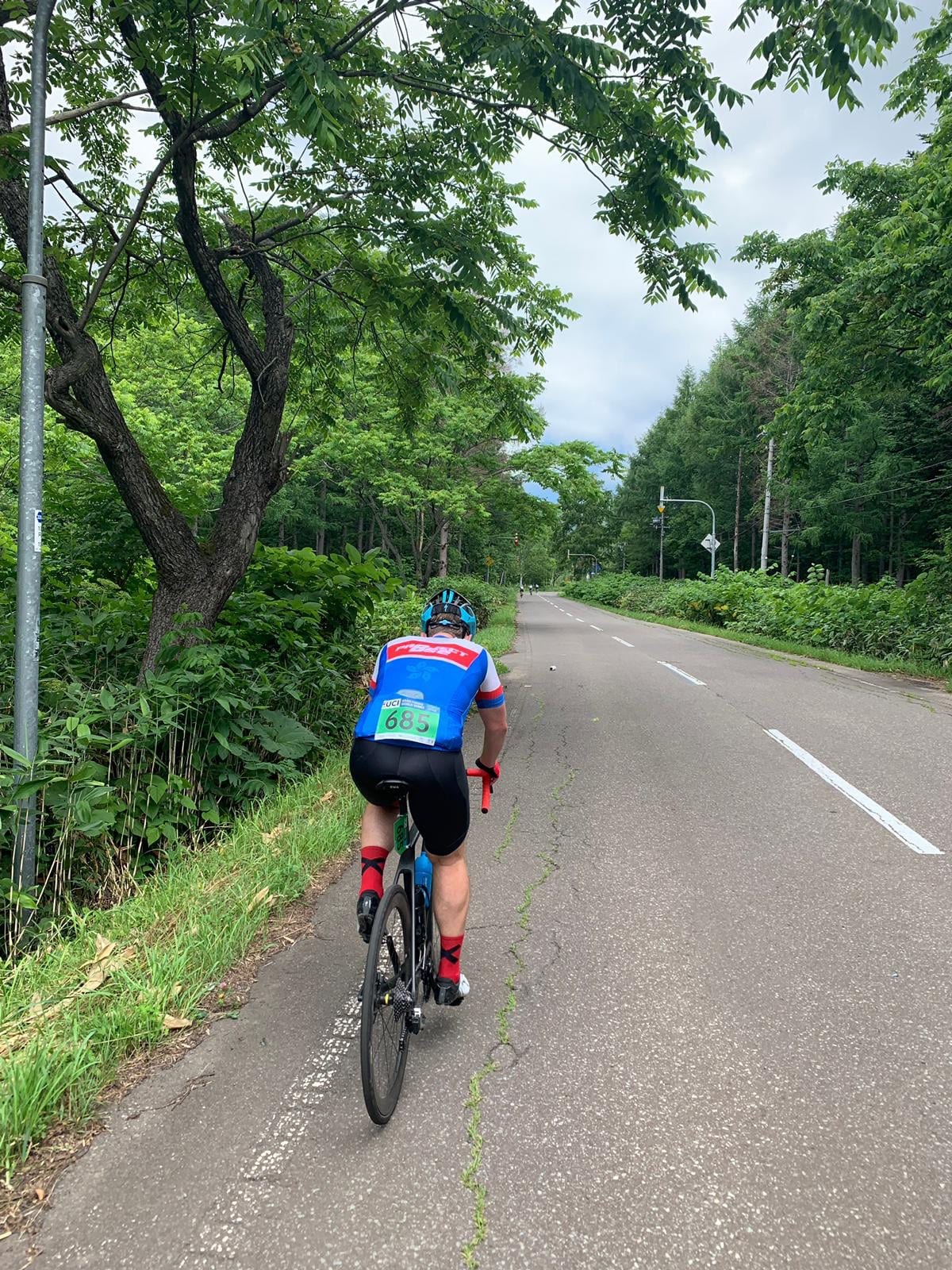 In theory this wasn’t too hard. The first 35 km is mostly rolling hills with just one relatively small climb. Even the 12.3 km Panorama Line climb is not very steep (by Hong Kong standards at least) with an average five percent. I’d even ridden this part of the course a couple of days earlier, so I knew what to expect. However the slow and lengthy neutral zone had me worried so I signalled to Kris that we should pick up the pace.

After an hour or so we hit the downhill that leads to the base of the Panorama climb. Conditions were perfect and, on closed roads, I flew down the wide, sweeping curves. I’m a nervous descender and had worked on this during my training. Even so I avoided looking at my speed for fear of freaking out (I later discovered I’d topped out at almost 80 kpm – by far the quickest I’d ever been on a bike!).

We hit the base of the main climb with 45 minutes to go and I was feeling good. I’d done the climb in 45 minutes before and I hadn’t pushed too hard that time. Kris calculated a sensible pace based on my FTP and we set about up the hill.

It was about two thirds of the way up that I began to realise I was in trouble. I was putting out more power than last time but my time was slower. I got the dreaded “virtual partner finished” alert on my Garmin and was running numbers in my head to work out what had gone wrong. Then it hit me – quite literally. We turned a corner and my bike was buffeted by a blast of wind. Kris signalled I should tuck in behind him but the wind was swirling so much there was little shelter to be had.

With the checkpoint still a distance off and time slipping away, panic begin to seize me. All I could think about was how many people I was about to let down. I pushed as hard as my legs would go. But the road played tricks. Each time I rounded “the final bend”, yet another would appear ahead. After an eternity we crested a rise and the checkpoint loomed at the end of a straight. I glanced at the time and knew it was touch-and-go. We hammered as fast as we could, flying past other riders. The team manning the checkpoint cheered us on and we crossed the line with just 50 seconds to spare. The relief was palpable but there was no time to rest, and still another three km to the actual top of the climb.

I’m not sure if it was the adrenaline coursing through my veins or the fear of missing another checkpoint, but we descended at break-neck speed. For the first time ever I felt like I was in Le Tour, a long line of riders snaking behind Kris and I, crouched low on the drops, pumping my legs on every straight and leaning hard over into the hairpins, my tyres gripping effortlessly to the buttery-smooth asphalt.

The hour allowed between checkpoint one and two, at the bottom of the long descent, was overly generous and sure enough we crossed that with more than 30 minutes to spare. We went through the first feed zone, tossing my old bidons and collecting two fresh ones without stopping (after a slight mishap on the first attempt where the bottle bounced from my hand). 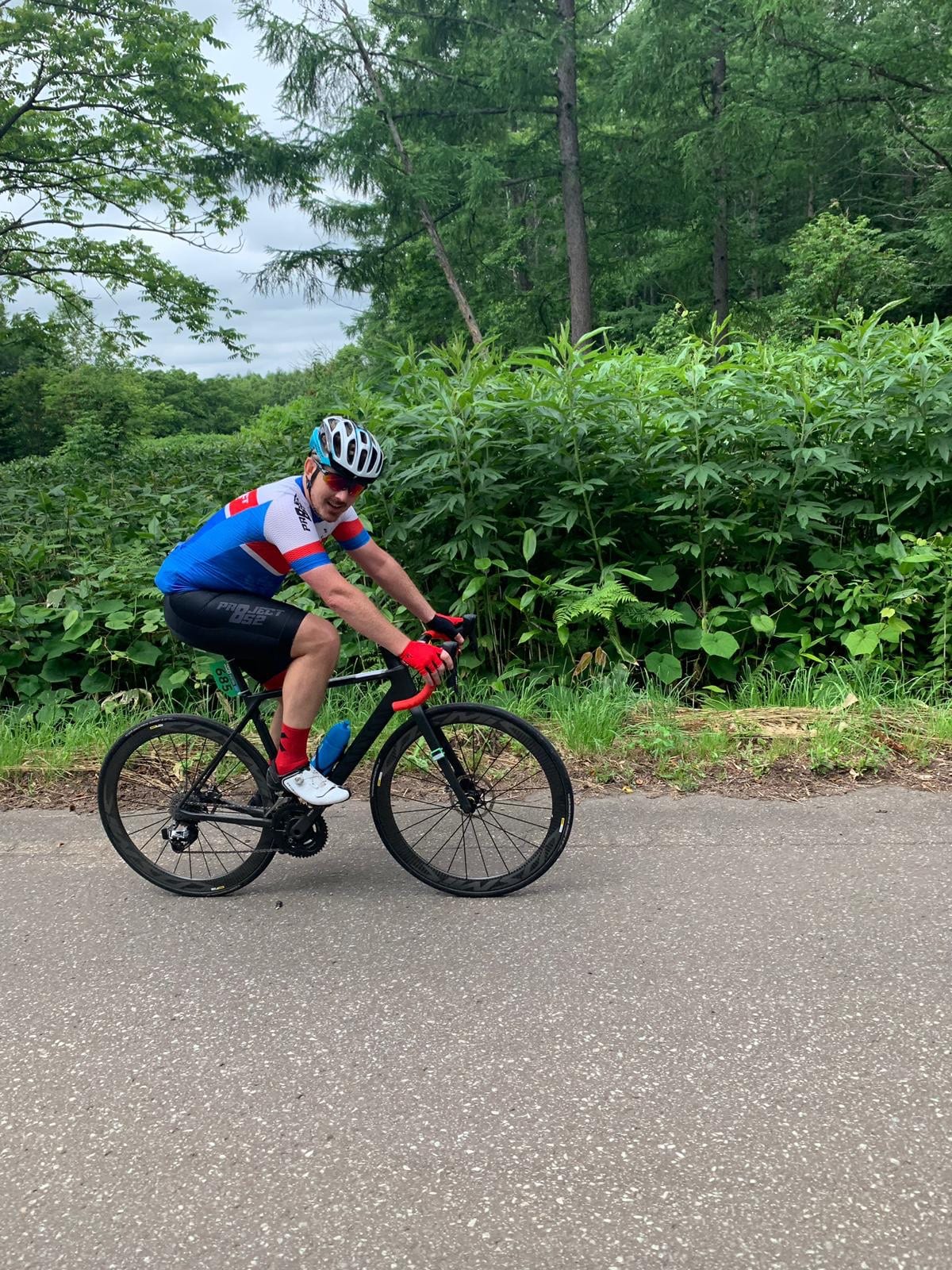 Then we were onto the flat section out to the sea and back. Kris instructed me to stick on his wheel at all costs. We turned 180 degrees at the end of the line and into a headwind (as always I’d failed to appreciate the tailwind on the way out). He’d rightly predicted no one else would take a turn on the front and by the end of the 20 km stretch he had a train of 30-40 riders lined up behind him.

The third checkpoint was at the top of the second major climb. But we’d made such good progress on the descent and (thanks to Kris) on the flat that the pressure was off. I set a steady power output up this 10.4 km climb. It was a little steeper at the start and end, with pitches up to nine percent, but a flat middle section allowed for recovery and dropped the overall average down to just four percent. I rolled over the top with a 30 minute buffer.

From there it was relatively plain sailing, despite a final 3.5 km, six percent climb inside the last 20 km. The terrain was gentle rolling hills pretty much all the way. Just as Kris had predicted, by maintaining our steady pace we “played pacman” and slowly gobbled up riders who’d past us earlier on but had now blown up. In that final 20 km I saw broken bikes and broken riders sprawled on the side of the road. Some were wearily pushing their bikes up just the slightest of gradients. I saw one rider from the 70 km race – which followed the same route at this point – give up the ghost and surrender to the sag wagon stalking ominous behind him.

The final 8 km into Hirafu is a gentle two percent climb. But with fatigue having taken a firm grip by this stage, it felt much worse. And to cap it all the finish line is at the top of a steep 800 m climb to the base of the ski lifts. However, with the end in sight my legs magically refilled with energy and I even managed a final blast the 14 percent pitch up to the line. I crossed filled with elation, relief and gratitude a full 15 minutes to spare. 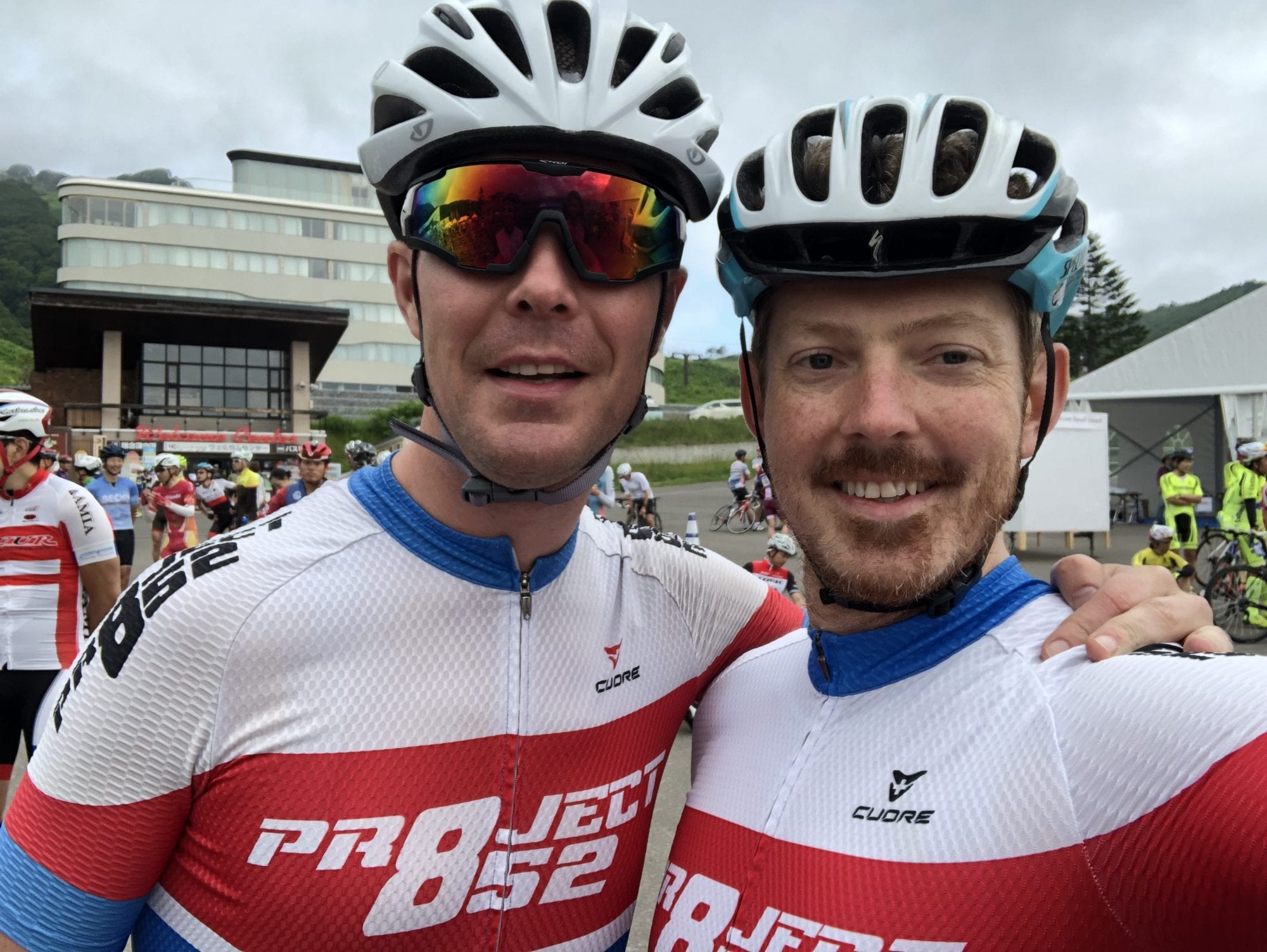 It was an amazingly challenging and rewarding ride and one I’ll cherish forever. My ‘official’ time was 05:00:44. I was only ever focused on finishing inside the time cut but, for the record, was 86/135 in my age group, with more than 30 riders classified DNF behind me. Without Kris’ guidance and coaching, irrespective of him sheltering me on the flats, it’s likely I wouldn’t have made it. But I’m still extremely proud of my achievement. For a novice racer to complete the Niseko Classic is no mean feat.

As for what’s next…well I once declared I’m just a casual cyclist who would never get into racing. But research into the next one is already underway!