‘A lap of France’, Andalucia, Spain

In a quest to escape the dreary winter weather of the UK, a few lucky people accompany Custom Cycle Coaching’s Tom Kirk to what in his opinion offers the best winter riding in Europe. His base in Orgiva, Andalucia, Southern Spain, is a region boasting quiet, smooth roads, good food, and the more than occasional ‘pro in the know’ out racking up the early season kilometres. On occasion he is bullied into leading a bit of an ‘epic’ final day route, which he likes to call ‘A lap of France’, or ‘Nuestra Vuelta de Francia’, purely from the shape you see on your Strava feed afterwards! 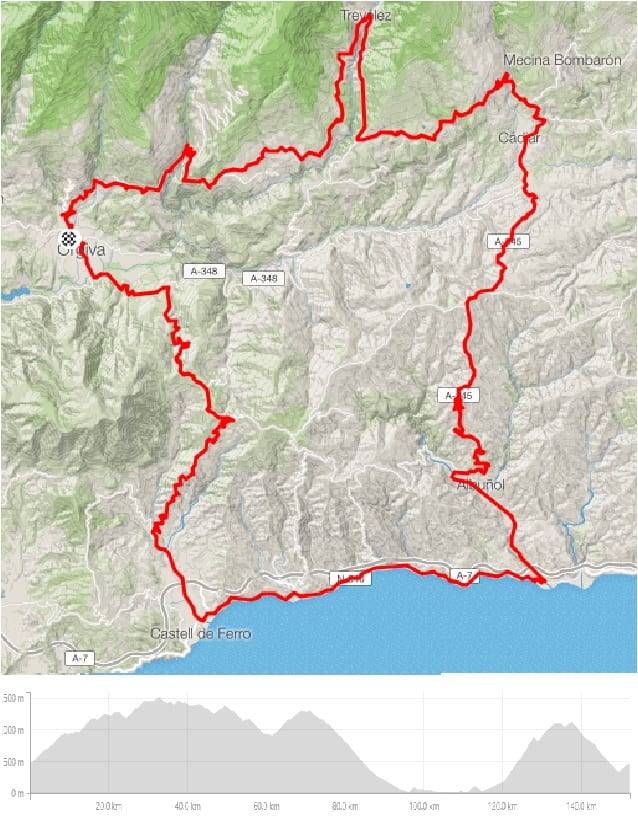 ‘A lap of France’

While the roads are smooth and the weather inviting, the climbing on this ride makes it a tough one, but with a bit of everything! As we include a stop or two it’s an all-day affair, but one that will leave you satisfied and ready for a slap up three course meal back at the hotel, maybe via the bakery or a tapas bar…

We start out a bit earlier than usual to fit in a big day, beginning with a gradual climb out of our base in the town of Orgiva. In 2015 these roads featured as the final climb of a stage in the Vuelta Espana, but we don’t turn left for the final steep 5 km stretch up to the finish line, still visible just before the tarmac ends. Instead we continue up the kinder gradients to Spain’s highest permanently inhabited village, Trevelez. The snowline is often visible from here, but despite the altitude reaching over 1,500 m, being south facing the snow rarely gets this low, and even in the winter the sun feels warm. One thing that you can’t escape in Trevelez is the main industry; some of Spain’s finest hams are dried here in the high altitude ‘secaderos’. The famous pigs graze on acorns further up the mountain, so you rarely see them here. Indeed the only livestock you might see in this mountain terrain are goats, herded as they have been for centuries by a man and his dog, as they wander the area cutting the grass on the steep slopes. This is definitely a ride for the Mountain goats. 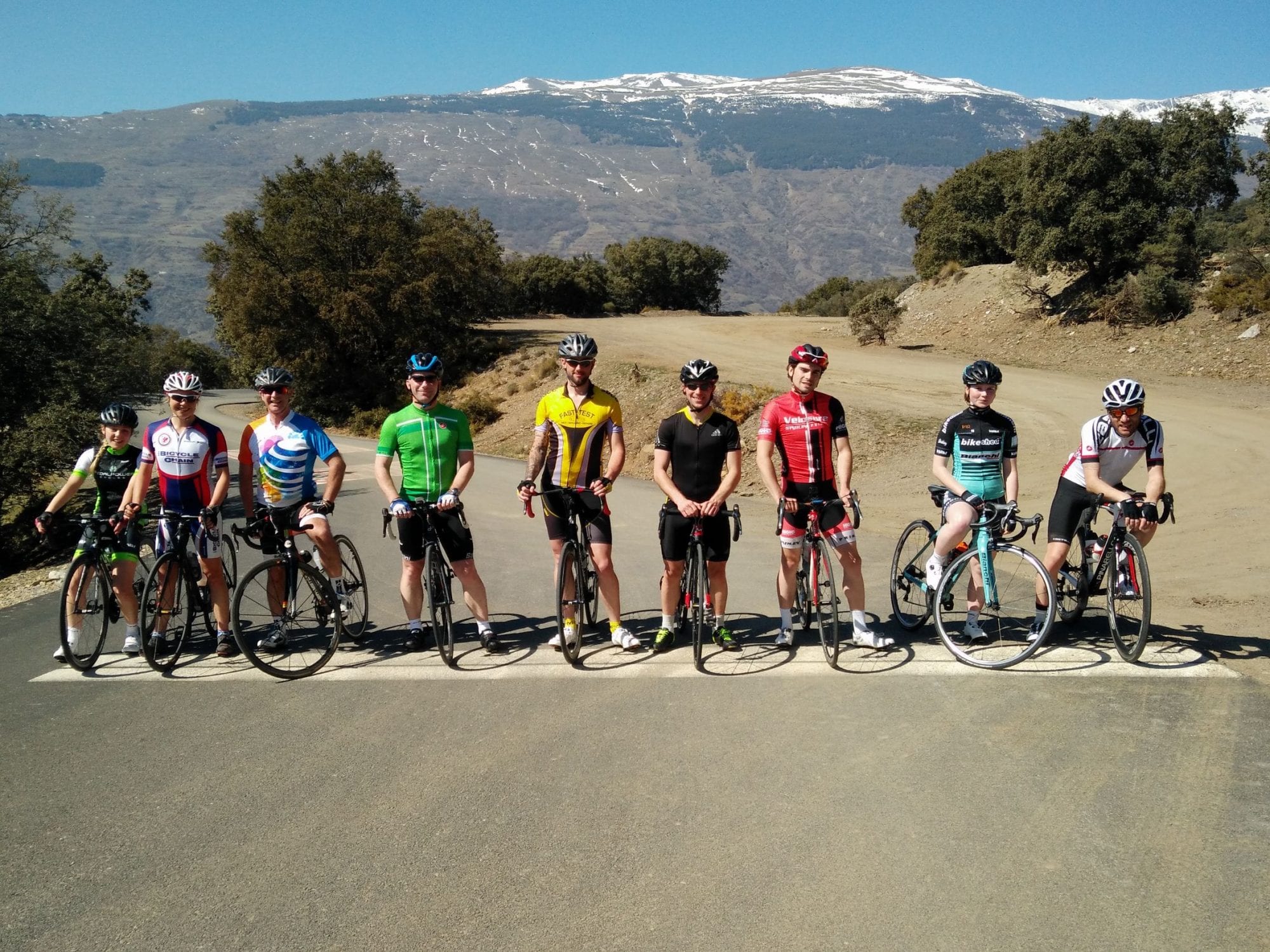 Once you hit Trevelez you continue along the ridge, with the Sierra Nevada off to your left. While you might see the odd tourist bus on the road leading up to the village, which seems to be a popular day trip for Spanish pensioners, the other side is almost devoid of traffic. The most human contact you’ll find is likely to be limited to the tiny villages, still sitting up well over 1,000 m high, with their own jamon ‘secaderos’, a bar and not a lot else. They do all however have at least one water fountain, with fresh spring water from the ice melt on the mountains; so even in the heat you are never far from some fresh, cold water. 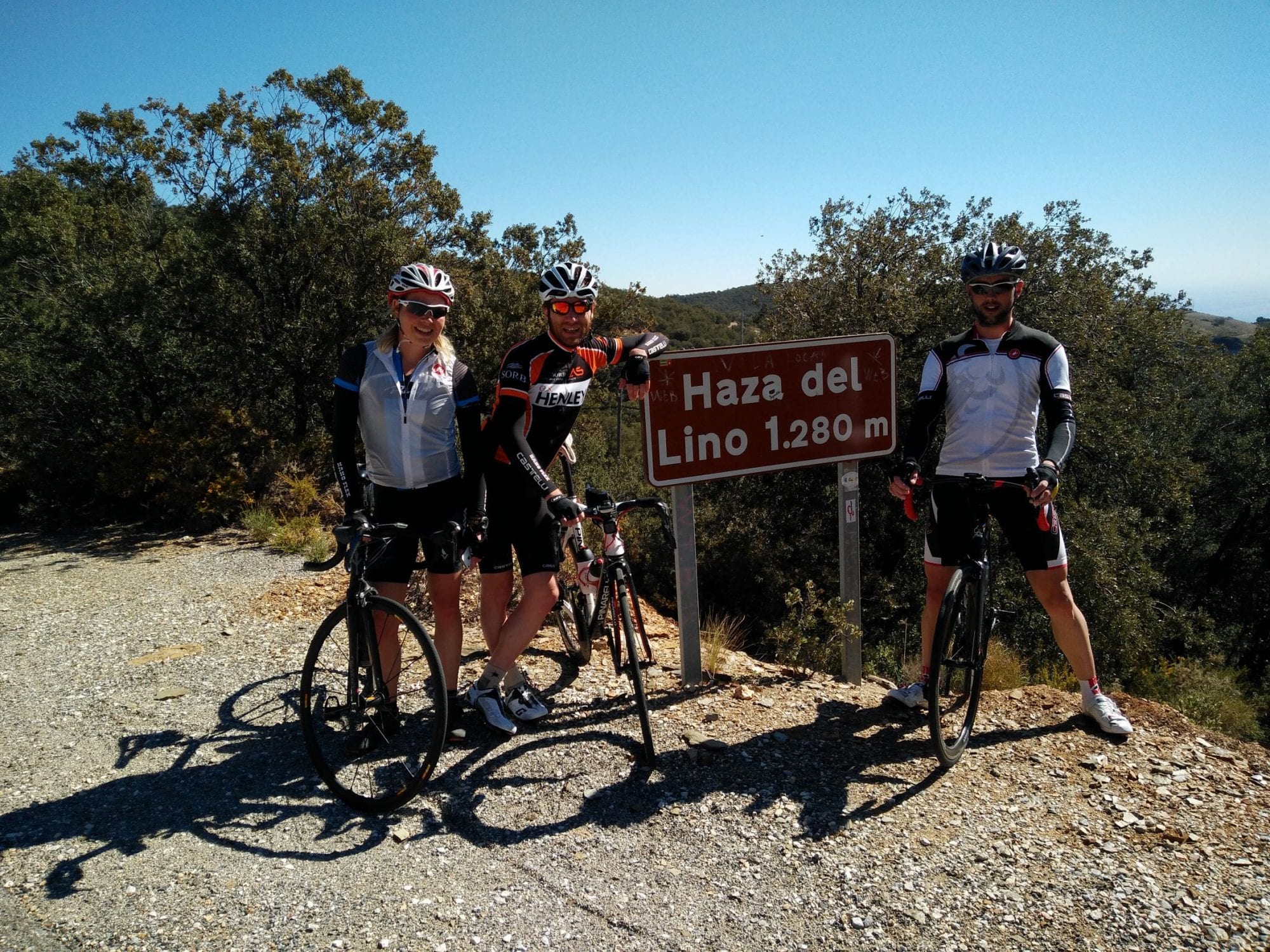 After a gradual descent off the ridge you are rewarded with a short, hairpinned, descent to Cadiar, an excellent cafe stop opportunity; but we normally push on for the reward of the coast! To reach that however you need to get over the next mountain ridge. Another 7 km climb up to the ‘Haza de Lino’ before the reward of a fantastic descent, with twists and hairpins through yet another ‘village in the sky’ into longer straight sections. Then comes the true reward for all that climbing earlier in the day: a long, straight, gradual downhill just begging for some through and off and your best Peter Sagan impression in a sprint, reaching pro-speeds on this final run-in to the coast. 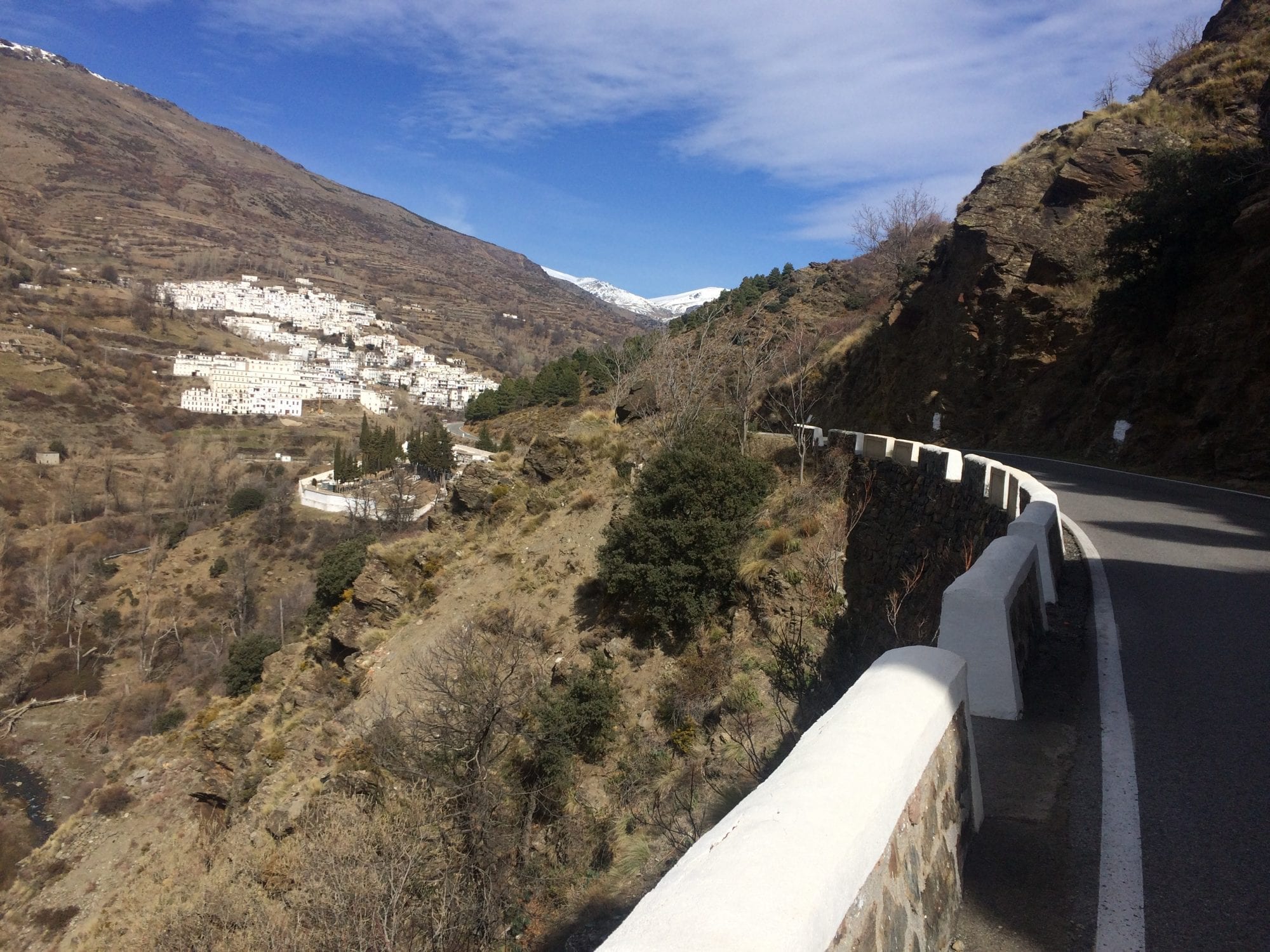 In a couple of hours you’ve descended from Spain’s highest village to the Mediterranean Sea, on the ‘Costa Tropical’; Europe’s greenhouse for tomatoes, avocados and many more tropical fruits and vegetables. We usually stop here for lunch, or maybe push on to another coastal town, fuelling up on ‘bocadillos’, cokes and coffee. If you’re more hungry, a full on ‘menu del dia’ is on the cards, costing 10-12 Euros and requiring a fair bit of digestion time! I have made, and subsequently regretted, that choice a few times! 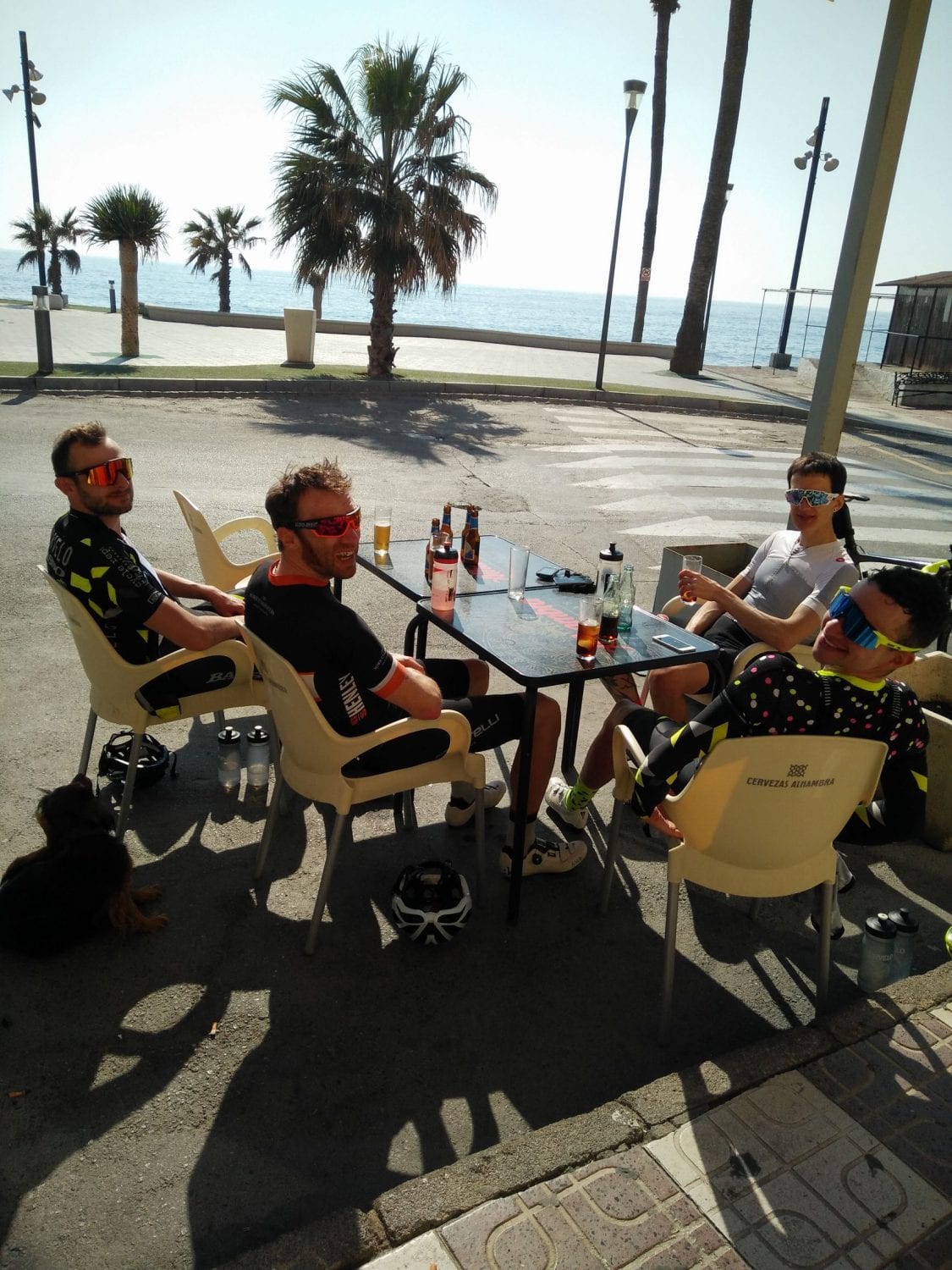 From the lunch stop the final sting in the tail of the day’s riding awaits. While there are other routes back (if you don’t mind extending an already long day in the saddle) the ‘classic’ route back involves one of the toughest climbs in the area to the village of Rubite. It’s not that long, at 8 km for the main part of the climb, but this averages 8%, with pitches up to 14% on the hairpins. The climb takes even former Spanish national champ and Vuelta podium finisher Francisco Mancebo (a regular in the Orgiva cafés during his training rides) half an hour according to Strava. The real difficulty however is the road surface. After being spoilt with pristine tarmac for 99% of your trip in Andalucia, the rough surface feels like being back in the Worcestershire lanes after a winter’s freeze-thaw cycle! On a hot day you may well be out of water after the previous refill at the coast, but like all the villages in the area, Rubite has a fresh water fountain; the downside being a slight downhill detour into the village itself, and well, what goes down… After a well deserved pit stop we regroup and switch to smooth tarmac again for the final bit of climbing of the day back up to the ridge of the Haza de Lino, which boasts amazing views of snow topped peaks on one side and the Mediterranean Sea on the other, maybe even the coast of Africa on a really clear day. 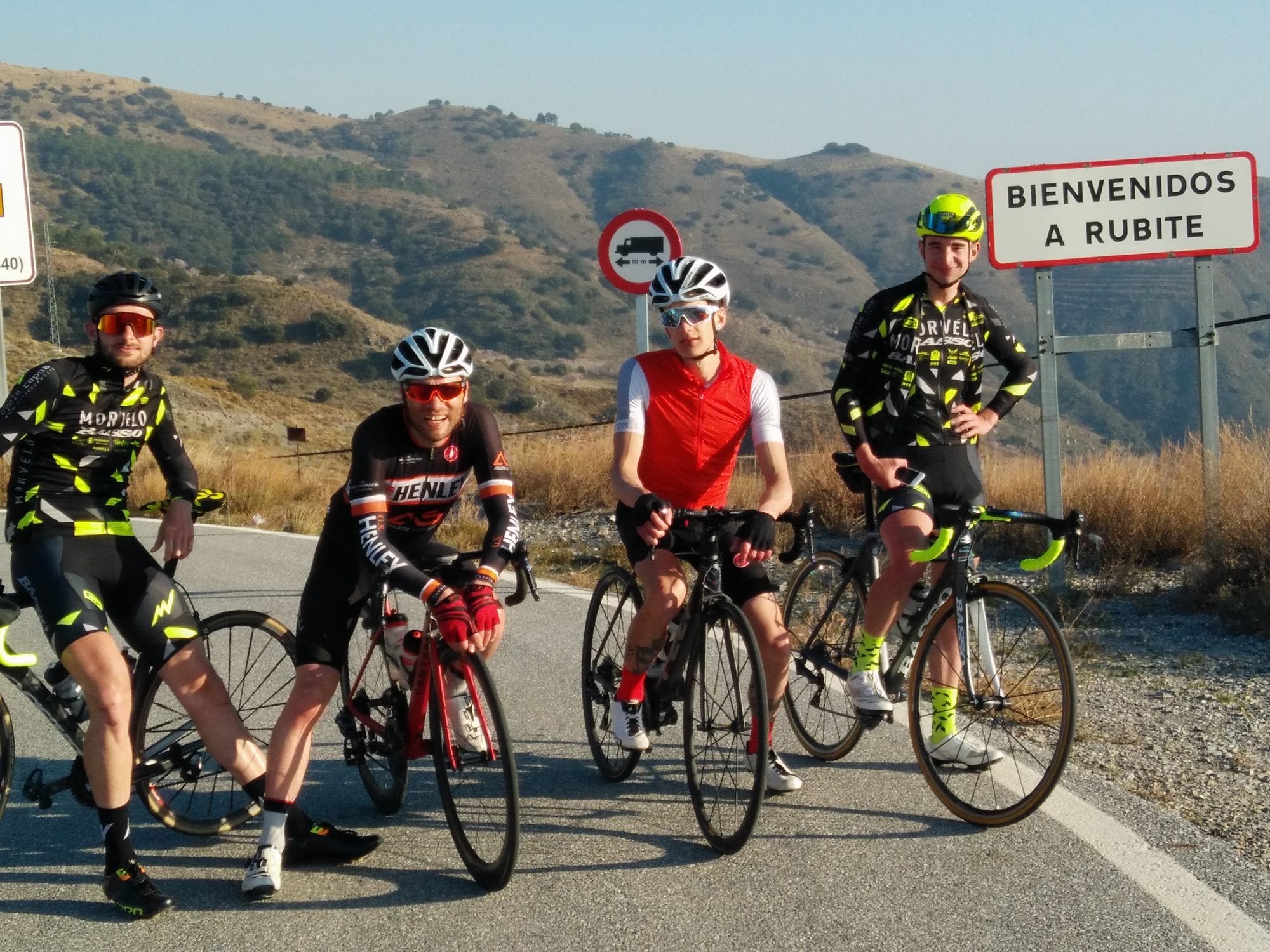 After all the hard work is done and you’ve taken advantage of the photo opportunities, it’s time for the reward of the final drop back down into Orgiva. Again, this is a descent of two halves, with the bends concentrated at the top before meeting the straighter valley road back to base. After a big day in the saddle it’s time to ride into town and enjoy something from the selection available at the bakery, or maybe a beer and tapas (why not both, you’ve earned it!), depending on your priorities!

An epic day out for everyone and a very satisfying one to complete. And it becomes even more satisfying that night when you sit to the ample dinner provided at the hotel, where the sore legs are relieved by a glass of the local wine, a bellyful of hearty local grub, and talk turns to next year’s ride!

Custom Cycle Coaching is a progressive coaching and lifestyle consultancy based in Birmingham, U.K. run by Tom Kirk.  We use our years of cycling experience and scientific background to develop training programmes customised to our clients goals and time availability. We passionately believe that successful training programmes are those that adapt continuously as the athlete progresses.  As such we aim to provide exceptional service by customising all plans to your individual requirements and continuously monitoring your improvement and adapting the plans as necessary.

We work with cyclists of all ages and levels and with Custom Cycle Coaching you can guarantee the attention to detail and feedback that brings results, not just in the short term but for your long term development as a cyclist, whatever your goals.